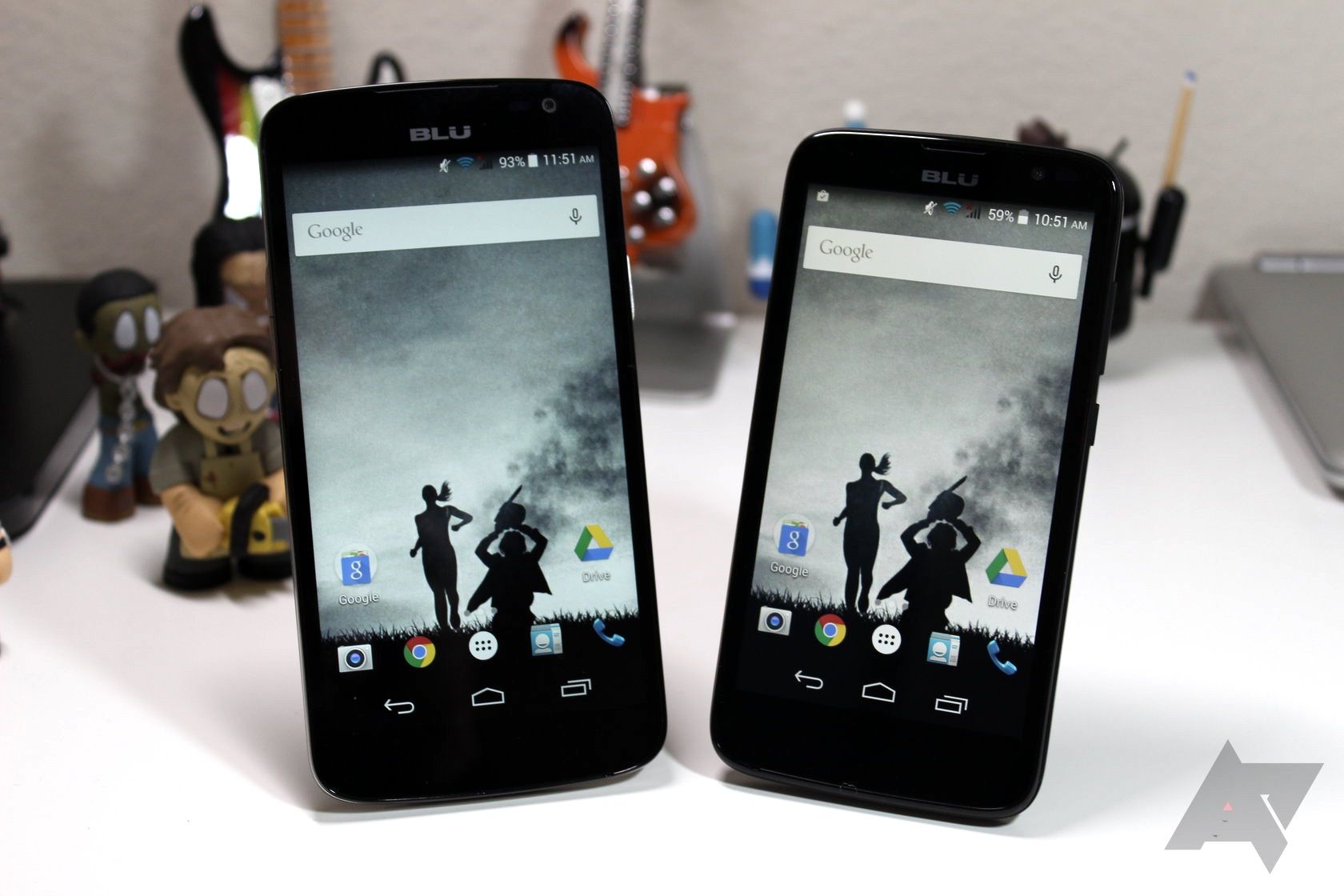 Back at CES in January, Blu announced a handful of upcoming devices that are all slated to hit shelves in Q1 2015. We’ve already taken a look at two of those phones: the super sleek Vivo Air and slim, as well as the enormous Studio Energy battery. Today I have the Studio X Plus (which is exactly like the Studio X, just bigger) and the ultra-affordable Studio G, two other devices advertised in the same lineup.

Both phones belong to Blu’s Studio line, which is basically Blu’s mid-range device series. You usually find slightly slower processors and lower quality displays than you would see on the company’s high-end devices, but they also come with matching prices. The Studio X Plus and G are no exception to this rule, as the X Plus costs just $ 150 and the G is available for a paltry $ 99.

For these prices, I already think these are good deals. Let’s take a closer look at each one now, starting with this Studio G, which offers a lot for its money.

Also, kudos to Blu for using the onscreen navigation buttons instead of the capacitive keys!

So, it’s a $ 99 phone. Personally, I would like never Expect a lot from a $ 99 phone – and I don’t think most of you would either. In a world where people regularly deposit over $ 500 on their phones, it’s pretty easy to see just how bad a hundred dollar handset could be. But really, I think Blu has done a good job here with such a budget device. In fact, I have reviewed / used devices that cost twice as much and are not as good. At the same time, I’ve also seen similarly priced phones that are probably just as good if not better (like the Moto E).

Design-wise, the G is a simple little device and certainly nothing to write home about. It has a modest 5-inch display with a meager 480 x 854 display, an acceptable 9.9mm thick bezel, a removable back, and a good 5 MP shooter. It actually packs the same quad-core MediaTek MT6582 processor as the Studio X / X Plus and Studio Energy, and in fact, it probably performs better than both due to the lower resolution display. The paltry 512MB of RAM is a little hard to swallow in 2015, but for all intents and purposes it gets the job done … at the most basic level, anyway.

A powerhouse is not.

When you take the price into consideration, though, it’s actually pretty solid. The display is not almost as bad as you would expect from a 480×854 panel, probably because of Blu’s ‘Infinite View’ technology, which I’m a big fan of – this always gives a screen a higher resolution than it does really is, at least in my eyes. Like I said earlier, it actually performs a bit better than other Blu phones with the same processor, and it consistently outperforms the Studio X Plus in AnTuTu. Of course, I’ve never been the biggest fan of comparing devices using benchmarks, because the “real world” experience is what really matters. Even then, however, the G just feels sharper than the X Plus, at least at first – I’m sure on a sufficiently long timeline 512MB of RAM would really start to show compared to the 1GB of the X Plus.

As for the build quality, it’s really not bad. It’s lightweight and all-plastic (naturally), but the buttons are surprisingly nice – not spongy at all. Lots of trips too. The entire back part is removable, this is where the two slots for SIM and microSD cards are located.

Overall, it’s a super affordable phone. Everything there is as good or better than you would expect for its given price, so there you go. It’s also worth noting that Blu has already announced plans to update Studio G to Lollipop; in fact, it even advertises the operating system as â€œAndroid 5.0 Lollipop (Upgradable)â€ on the box. I’ll be interested to see how it works with just 512MB of RAM.

The Studio X and the X Plus are virtually identical in all respects except for the screen size (the X is 5.0, X Plus is 5.5). So, this practice should apply to both devices even if I’m only using the X Plus. So here is.

The Studio X Plus is quite simple from a design standpoint: removable soft-touch plastic back, unassuming black faceplate, and a silver plastic band wrapped around the whole thing. The power button and volume rockers are on the sides of the device and blend in pretty well with said plastic strip. It’s not frowned upon, in fact.

What about his guts? Much the same: sober, unassuming, out-of-the-box guts. The MediaTek chip that powers the whole thing is the same one in Studio G and Studio Energy, so it’s not the best I’ve ever used – even from MediaTek. That said, it will do … as long as you don’t get bogged down too much hard. Trying to run three or four persistent background processes, for example, will prove to be a less than stellar experience. But really, it’s a $ 150 phone – keeping your expectations under control is key with budget smartphones.

The display is a bit better than the G panel, which is honestly normal – it is high resolution, after all. Color reproduction also seems to be a bit better, as you can probably see from the hero image at the top of this article. The screen of the X seems to be a little warmer than its little cousin.

Like Studio G, the build is decent. It’s all plastic, but it doesn’t necessarily look “cheap”. Sounds like over $ 150 off the phone I would say.

Much like the G (and other Blu phones announced at CES), the company plans to update the X and X Plus to Lollipop – again such an advertisement on the box. While I first questioned the â€œAndroid 5.0 (upgradable)â€ package on the packaging, I think this is a good sign that Blu is definitely committing to the update. This really puts them on the hook, and I think this phone will benefit greatly from 5.0+.

The X Plus and G are both available for purchase exclusively from Best Buy.

The app can tell you when it crashes

Cameron is a self-taught geek, Android enthusiast, horror movie fanatic, musician and cyclist. When he’s not typing keys here at AP, you can find him hanging out with his wife and kids, playing the 6-string, spinning the streets, or watching The Texas. Chainsaw Massacre on loop.