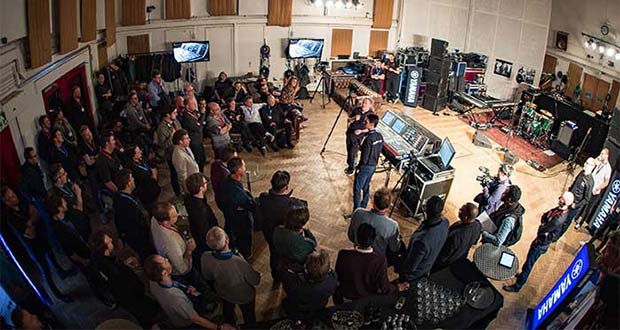 Around 60 of the UK’s most renowned live mixing engineers, theater sound designers and representatives from audio rental companies gathered at Studio Two at Abbey Road Studios in London for an informal workshop on digital mixing systems from the Rivage PM series from Yamaha.

Although most famous by the mainstream for the groundbreaking albums recorded by The Beatles and producer Sir George Martin in Studio Two, Abbey Road has hosted a Who’s Who of the pop and rock industry, as well as many classic recordings of music from the world. orchestra and films. .

â€œIt was a way to give key members of the UK professional audio community a chance to informally network and learn more about Yamaha’s Rivage PM series systems, in an inspiring location and a friendly atmosphere and discreet, â€said Yamaha Commercial Audio UK / RoI. Sales Director Alex Warren, who coordinated the event with UK / RoI Marketing Director Chris Irvine.

After meeting for a complementary lunch, followed by a walk along Abbey Road to the studios, the guests were greeted by Irvine. This was followed by a studio potted story by its head of audio products Mirek Stiles.

Yamaha’s Andy Cooper then hosted a question-and-answer session with Pope, which included questions from the assembled guests. Pope has spent much of 2017 on tour with the Rivage PM10 system and has given an honest and straightforward answer to the question of how many times the system has failed: “Never”.

From there, guests were able to familiarize themselves with the Rivage PM systems – a brand new PM7, supplied by Subfrantic Production Services, and two PM10s. With Yamaha’s Tim Bamber, Christoph Haertwig, Hans Metger, Tom Rundle and Reece Stead also on hand to discuss systems and answer questions, it gave guests unfamiliar with the systems the opportunity to learn more.

In the days that followed, Yamaha received many positive responses from mixing engineers, sound designers and participants in the audio rental industry.

â€œYamaha had a great day at Abbey Road, the members of Jamiroquai entertained Rick Pope by mixing them on a PM10. A question and answer session with Rick and the opportunity to catch up with the Yamaha teamâ€¦ that’s the way to do it! Said Mike Lowe, director of Britannia Row Productions.

â€œThe day was a very well organized and useful event that will be remembered not only from a large group, but also a great opportunity to meet friends old and new as well as learn more about the products. real world users. I couldn’t believe some of the people who were there and they did a great job getting everyone to show up, â€said Andy Simmons, Sales Manager at Orbital Sound.