A few months ago, I wrote an article for this newspaper in which I referred to an artist working in Austin as “local artist” in the title. This artist later generously shared the post on his personal Instagram, and an older, more established artist, who also works in Austin, commented “Congratulations … but you know I hate the term ‘local’ – you are Austin based !!! “

Of course, I had used the word “local” simply to point out that this artist, who had recently won a grand prize, lives in Austin, not to say in a derogatory way that his work was suitable locally, as opposed to a local. national or international level. But the brief comment made me wonder, “If I had written for a New York article about a New York-based artist, would I have called him a ‘local’ artist?” ” Probably not. So why was I comfortable calling an exceptionally talented artist who, by the way, exhibits in cities across the United States, a “local” artist? Are artists who live in centers like New York, Los Angeles, Berlin and Tokyo “above” words as local? What does this suggest about the way people think of artists living in Austin, or in any city or town outside of these so-called contemporary art “centers”?

The Contemporary Austin is also beginning to ask these questions. Their current two-part show, Crit Group Reunion, has long shed light on the strong community of visual artists working in Austin, an initiative that initiates a more in-depth conversation about how large institutions should invest in existing art ecosystems in the places where they are located. In a first for Contemporary, all of the featured artists are alumni of its Crit Group program, which was launched in 2014 to give people a chance to share their work and receive feedback, participate in professional development opportunities. and to deepen the links with the art of Austin. community. Each year, less than 10 artists are selected to join Crit Group. Normally, at the end of the annual program, each cohort exhibits their work at the grayDUCK Gallery in East Austin. This time, for the first time for the Contemporary, their work will be exhibited in its gallery at the Downtown Jones Center.

The first chapter of the exhibit, “Facing the World,” which opened on September 11, was loosely focused on how sheltering in place draws attention to the natural and domestic environments that surround us. surround. The second chapter, “Face to Face”, which opens on November 20, will explore how aggravated health and social crises have changed our relationships with each other and we see ourselves in broader social settings.

So what motivated a large institution like the Contemporary to suddenly show these Austin artists in the museum itself, as opposed to a smaller partner gallery? Robin K. Williams, the associate curator involved in the exhibit, explained that “COVID has struck, and everything has been tossed into the air. … The museum closed its doors and this forced us to reconfigure the exhibition schedule. Williams also mentioned that as the museum grappled with these abrupt changes, it ushered in a new executive director, sharon maidenberg, in the summer of 2020, when the protests following the George Floyd murder drew attention. more acute on issues such as fairness and visibility.

These internal and societal changes brought the institution, like many others, to confront the artists it had historically shown and why they had been selected. Perhaps more importantly, they were also asked to consider which artists had been excluded from these opportunities in the first place. Williams recalled that the conversations that took place at the time generated strong feelings among the staff of the Contemporary to produce an exhibit that specifically served the city of Austin. She noted that many of her colleagues shared the new leadership’s goal “to see the museum become truly rooted in the local community, to the same degree that it has functioned nationally and internationally in art” .

“[We want] to see the museum become truly strongly rooted in the local community, to the same degree that it has functioned nationally and internationally in art.– Robin K. Williams, Contemporary Austin

Authentic community service has always been at the heart of Crit Group, so highlighting this program seemed like a concrete and meaningful way to express the institution’s renewed commitments to local and regional artists and audiences. Williams said that bringing the artists together for the show “re-energized the community building that was integral to the whole philosophy of the program itself.”

Early in the planning, the curators made a decisive effort to listen and respond to the changing needs of artists. Williams and Crit Group co-founder Andrea Mellard began the process by arranging meetings of each cohort on Zoom, followed by individual studio visits with the 52 artists in the show. During the process, curators listened to artists describe new challenges – such as decreased job security, loss of studio space or time, and increased family responsibilities – but also unlikely repays, such as less. social obligations and more leniency with deadlines.

Williams pointed out that “everything was pretty austere” in the summer of 2020, when these conversations were taking place: “A lot of museums, and especially small institutions, have had to cancel shows, which means artists who had shows in the books suddenly don’t need it anymore. ” The prospect of having an exhibit open in the fall of 2021, when they imagined the severity of the pandemic would diminish (in reality, the opening of the exhibit coincided with a wave of COVID caused by the Delta variant) , has become a beacon of hope on the horizon to look towards. 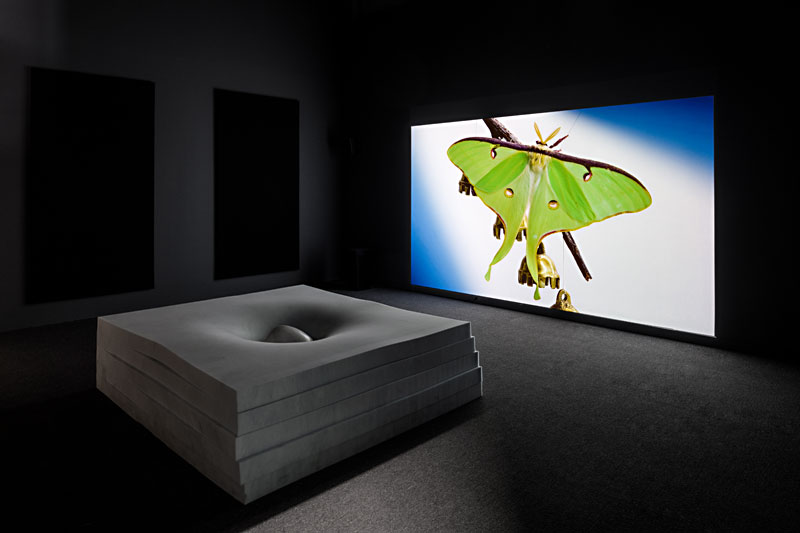 Almost all of the work featured in Crit Group Reunion was done in 2020, which means it risked being just another pandemic group show, one of those forced, underdeveloped and sometimes painfully disjointed that institutions seem to think provide a deep reflection on the past 20 odd months. However, the bulk of the collection does not deal with the pandemic at all, but rather is, to use Williams’ words, “conditioned by this moment in time.”

As artist Virginia Lee Montgomery addressed her contribution to the show, she wanted to create a soft and immersive piece that depicted the experience of being released from home confinement. During the pandemic, Montgomery raised luna caterpillars in his studio in Hyde Park. Observing them between remote work sessions for her day job, she realized that moths were a “wonderful symbol to embody hope, metamorphosis regeneration and emergence.” Montgomery then produced MOON ! a striking four-minute video in the exhibit, which shows moths through their maturation, performing delicate functions like ringing bells and interacting with an insect-sized camera that Montgomery specially designed for them.

This spirit of generosity, wonder and empathy also surfaced for Steve Parker, who produced a sound performance at Laguna Gloria in tandem with the Jones Center exhibit. Parker has degrees in music and math, and before Crit Group, had never shown work in an art gallery. When I asked Parker what he thought as he conceived the performance of Laguna Gloria, he referred to Hildegard von Bingen, a 12th-century German abbess, mystic, songwriter and composer, who “was interested in the potential of sound and to his recovery. properties … and how the practice of purposeful listening can be an act of self-empowerment. “Parker reflected on the healing potential of music as he created Elegy of the foghorn, the first large-scale performance he has led since the start of the pandemic. He says, “I really enjoy doing art with other people, and I think this will be one of those really powerful experiences.”

Crit Group was conducted virtually in 2020, and Contemporary is still evaluating how and if it should continue the program, or perhaps modify it in the future. However, the former artists said it was invaluable to them. Montgomery described it as “a way to literally share the knowledge we each have gained from being, in many cases, long-time practitioners of the art.” She explained that a viewer “cannot necessarily look at a piece of art on the gallery wall and [think], ‘Oh, this is done by someone who has invested a lot of time, energy, education, schooling and decades of participating in a rigorous subculture to do it. [happen]. ”Crit Group recognizes the“ underground work ”that artists engage in, and that seems to be part of its unusual beauty and functionality.

The retrospective has personal significance for Dawn Okoro, whose self-portrait in colored pencil will be included in the second chapter of the reunion. She recalled her own experiences while visiting the Jones Center in early August: “I remember looking at the artist’s work and thinking, ‘Wow, how can I get my work here? “… It looks like you have to go exhibit in New York or overseas before you can come and show here.” After participating in the Crit Group and then exhibiting in New York and overseas, Okoro said that having your own job at the Jones Center “feels like the circle has come full circle for me”.

Crit Group Reunion celebrates the vital cultural contributions of visual artists living in Austin by placing their work in a premier space in the busy downtown area. Particularly in a city best known for its more established musical and film cultures, an exhibition like Crit Group Reunion has the potential to put Austin on the map as a major destination for the visual arts. The show, and the program that inspired it, provides a prime example of how an institution can elevate emerging artists to much greater visibility. After all, the performers in this show aren’t just “local”. They are based in Austin.

A version of this article appeared in print on November 19, 2021 with the title: Are you local?